So now that we have done our trip to Florida over Christmas when Maya was 3 months, and our recent trip to Puerto Rico for my girlfriend’s wedding when Maya was 6 months (we got lucky with hot vacay’s this winter!), I feel like I can pass on some tips and tricks for flying with a baby. I’m definitely no expert, but both were long enough travel days and used different airlines, so I feel like we had a bit of variety in our experience. Some were nighttime flights, some were daytime ones, and all had connections. 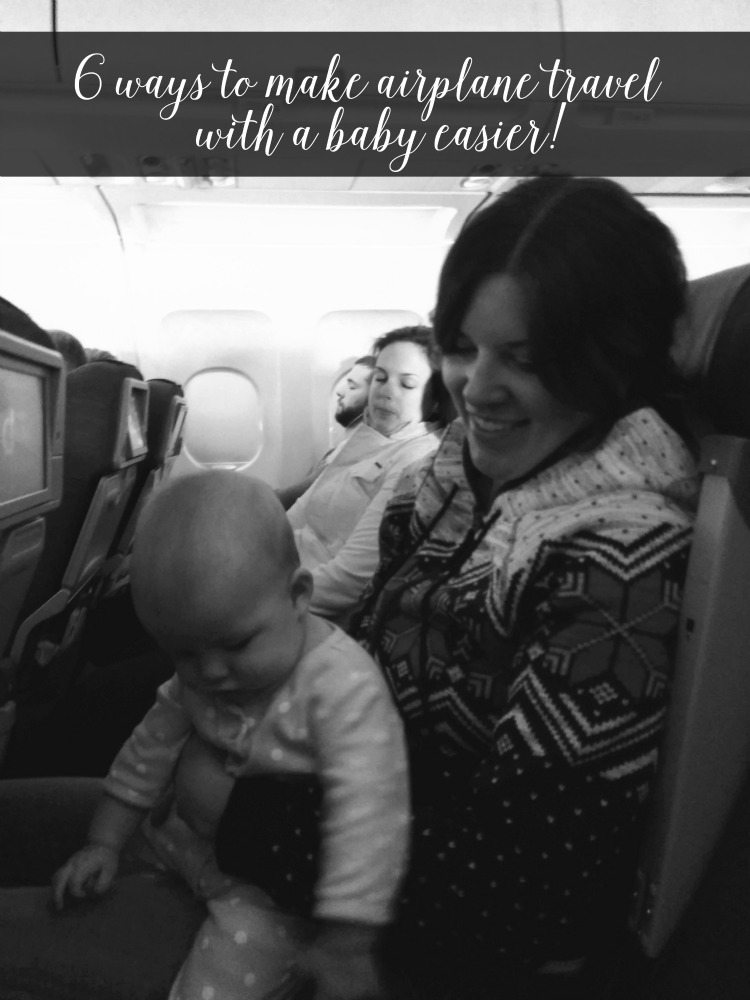 I was definitely nervous before going, but in the end found it not to be too bad. Here were some of the things that worked for us.

1 // Seats. When we booked our tickets, we chose a window and aisle seat fairly close to the back of the plane. We did this because the middle seat is always the last one selected, so we figured if there were by chance some empty seats on the flight, a middle one (especially near the back) is the most likely to be left open. On all the flights we went on we asked when we were checking in if the flight was full – and the answer was always yes. So we assumed that we would have someone sitting in between us and would just ask them if they wanted the window instead (and we would take the middle and aisle). Who’s going to *want* a middle seat over a window anyway, right? But just as a double check measure, when we got to the gate, we would go up and ask again if the flight was full. And you know what? For about half of our flights, it turned out it wasn’t entirely full, and they were able to do a little switcharoos and give us that empty middle seat. The extra room makes such a nice difference to give the baby somewhere to sit and move around. We even got Maya to fall asleep lying down in the seat on a few flights! So lesson learned? Always check again at the gate. Those folks seem to be able to have more control over the seat selection. 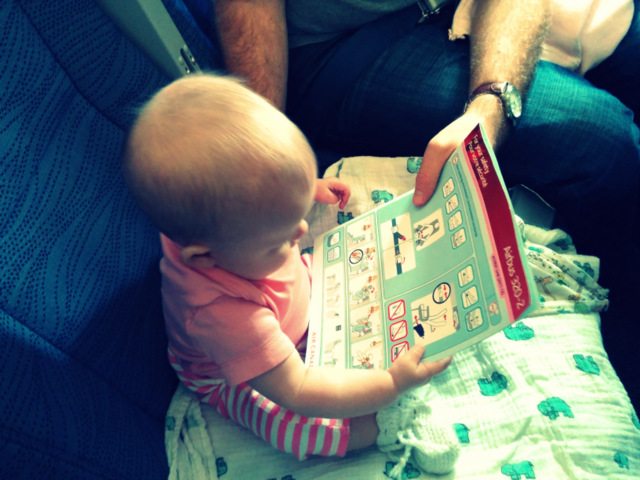 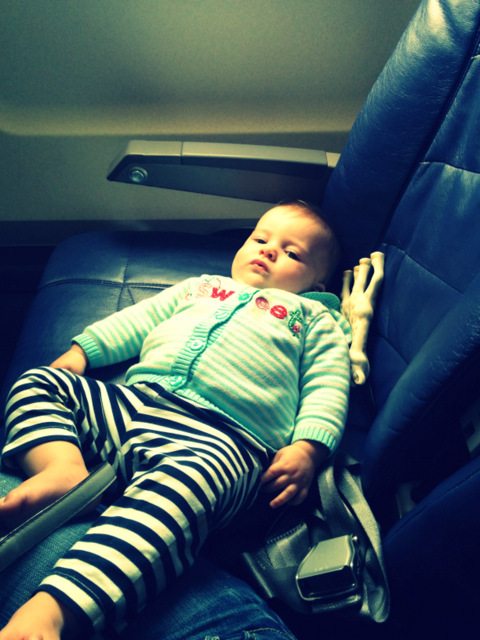 2 // Board Early. This might seem obvious, but board the plane early to ensure that you get enough space in the overhead bins. All flights give priority boarding to first class travelers, but most will also allow families, elderly, and others who require assistance to board early. Take advantage of it. You really don’t want one of your bags in the overhead bin 10 rows behind you.

3 // Sneak in Sleep. We tried to get Maya to sleep anytime we were waiting around in the airport. She is usually able to fall asleep in the stroller or the carrier if you walk around for long enough, so we took that time to just walk walk walk, until she had nodded off. We knew that sleeping on the plane would be more difficult, so it was important to catch as many zzz’s for her in the airport to reduce potential on-plane crankiness. Any schedule you might have at home for naptime sort of goes out the window when you’re flying, so for us we just tried to get her to sleep whenever we could. The more sleep, the happier the babe.

Once on the plane, we ended up getting her to sleep a few different ways. When we had the empty middle seat we would lie her down with some cozy blankets all around, and then give her a bottle and sing quietly until she nodded off. You obviously need to stay alert when they are sleeping like this though, as you can’t let them roll around! We also used the carrier and had her fall asleep in it, but we found it to be a bit uncomfortable to sit in after a while. Because of that, we would instead hold her facing outwards or inwards (whichever she preferred) and went to the back of the plane to bounce a little. I would just go and stand behind the bathrooms where the hosts/hostesses are. They were always super friendly. This usually made her sleepy and then we would go back to our seats, sit down carefully, and she would stay asleep. It’s not the best because then your arms aren’t really free to do anything else, but if you just want to put your head back and try to doze a little yourself, it’s not bad.

One of the things I totally would’ve used if we had the opportunity are those attachable bassinets that some airlines have. None of our flights had them, but if you are flying with a baby then I would definitely call the airline ahead of time and see if you can swing one of those. You sit up in the first row and the bassinet attaches to the wall in front of the seats. I think the weight limit is pretty limited (15 pounds rings a bell?), but it’s definitely worth checking into. 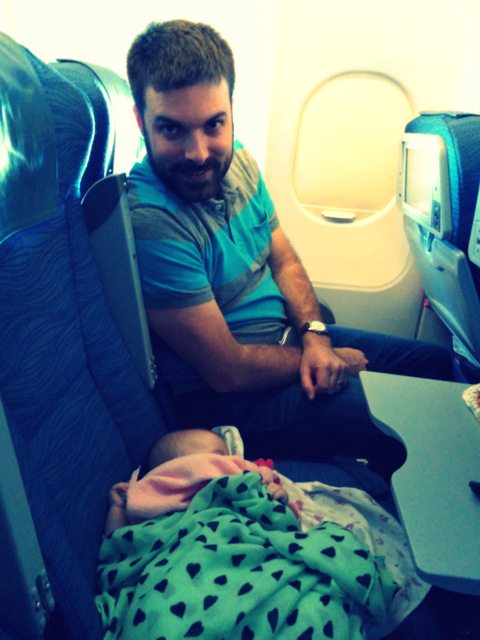 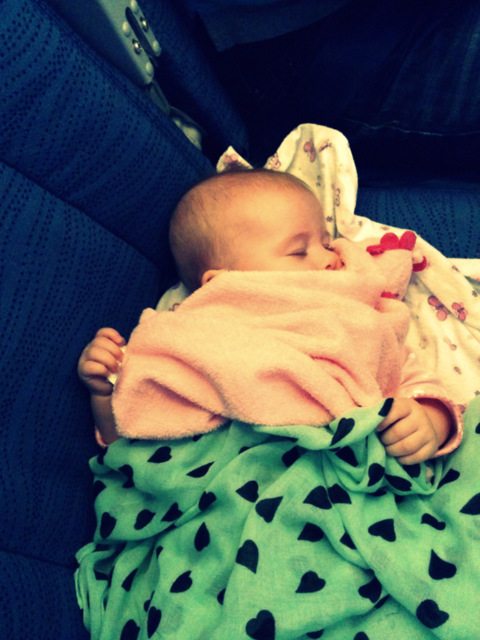 4 // Ease the Take off and Landing. So funnily enough I was told by the stewardesses that I couldn’t wear the carrier during take-off, and then that wearing the carrier is a great position, and then getting absolutely no instruction – all depending on which airline I flew with. There clearly aren’t any hard and fast rules on this. Holding the baby in an upright position (like a burping position) is the way to go – so wearing the carrier is actually perfect for this. Only once was I asked to take off the carrier — so I just undid the arm straps, but kept the middle all done up. Then during take off and landing I would just sing quietly to Maya in her ear. This seemed to distract her enough and she was happy as a clam. If your baby is a soother baby, I would pop one in as a distraction, and in case it helped with the ear popping. I also had a bottle at the ready, and wouldn’t have hesitated to adjust my holding position with her a bit to be able to pop it in, had she started to fuss. If you are breastfeeding, I would be ready to quickly get out a boob! The flight staff are going to be sitting down themselves during take off and landing and won’t actually be able to see you. I would do whatever works to calm your baby, as long as you are holding them securely in case of turbulence. 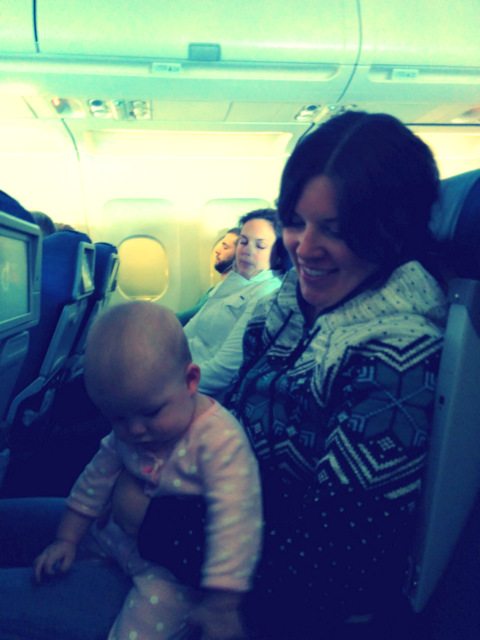 5 // Smart Packing. In terms of what to have in your diaper bag, we kept it pretty simple: diapers + wipes with a portable changing pad, 1 big muslin blanket, 2 changes of clothes (layers so it was easy to put on/remove if the plane was hot or cold, or if things got messy), a couple of favourite toys, a soother, a couple of bibs, and several bottles (however many were required for the length of travel). We always put Maya in a clean diaper before boarding each flight, to try to minimize having to change her on the plane. Changing on the flight is do-able, but not the easiest in those small bathrooms.

We had the diaper bag with most of those things in it, plus the things that I wanted for myself on the plane (it doubled as my purse), so it was all at-the-ready. Then we had a small suitcase as the other carry-on with other things that we didn’t think we would need on the flight: one of the change of clothes, all of my pumping gear, extra formula, extra diapers, etc. That way you can have the diaper bag on the floor where you are sitting, and the other in the overhead bin, and don’t need to mess about on the flight trying to get things. 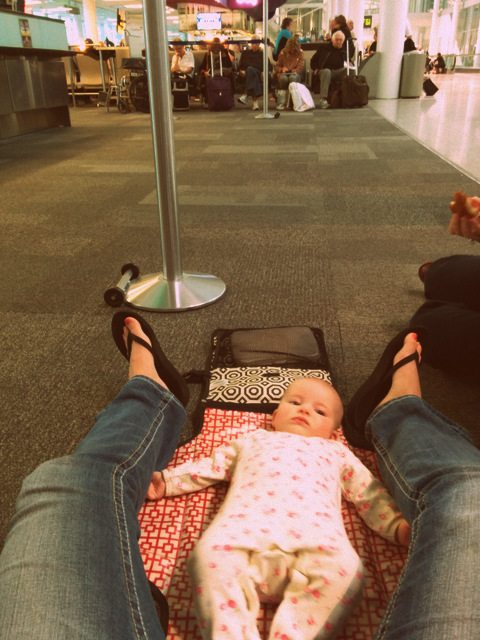 6 // On Bottle Feeding and Baby Food. Breastfeeding is obviously a lot easier if you’re travelling, but if that isn’t an option for you like it wasn’t for me, you’ll be happy to hear that with a bit of planning it really wasn’t a big deal to bottle feed during our travel. It wasn’t a problem in any airport we went through to have bottles that were already full with water, or to bring liquid formula (they understand that this is a requirement for travelling with babies). For when we did water, we just measured out the right amount of water in each bottle and sealed it. Don’t do bottles that are too huge, because you need to throw out what the baby doesn’t drink — no fridge to put it in and save for next time. Then we had pre-measured amounts of powdered formula in a plastic container (like this one) that were ready to mix in and shake. We didn’t want to have to rely on getting water from the hostesses during flights just in case we were in a pinch. Since the water had been sitting out, it was at room temperature which is how Maya drinks her bottles. If you needed to warm them up, I’m sure you could ask the hostess for some warm water to dunk the bottle into.

We also had some jars of baby food with us, and again this wasn’t a problem to take through security. Just get it out when you are going through the conveyor and the guards will run in through a test thing. No biggie. We tried to feed Maya actual food before boarding – we would just hit up an airport restaurant with a high chair. We figured it would just be too messy on the plane. 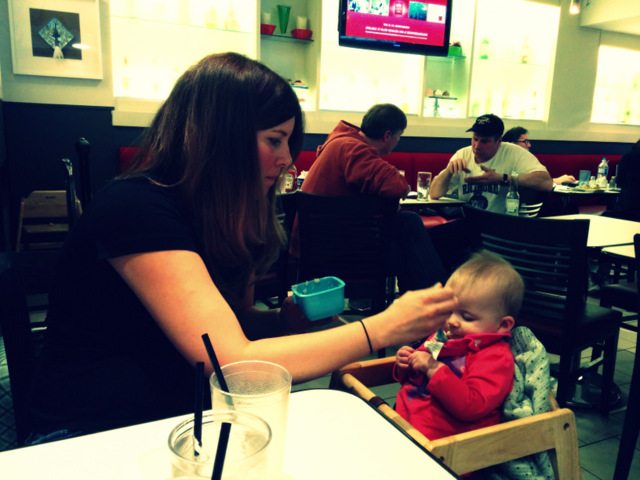 One of my best tips? Travel with grandparents. Man those two can seriously help a girl out. I even got to read a gossip magazine or two like the BB (“before baby”) travel days. The best! 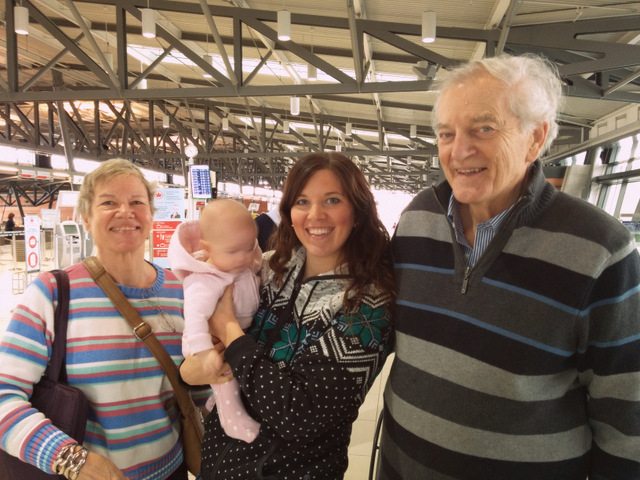 So I think that’s about it for tips and tricks on flying with a baby. I’ll do a part 2 travel post with our “go to” packing list, and other lessons learned. Stay tuned for that one!

Have you guys done any flying with a baby? Any advice or tips you want to share? Any horrible stories? One of my girlfriends who flew with her baby who had colic brought little gift bags for the travelers next to her with things like earplugs, gum, and a little note “from the baby” that said something like “Hi! It’s my first time traveling. Sorry if I get scared and cry a bit. Please be patient!”. I thought that was a cute idea!