So when we last left off, we had done the demo and tub install, tiling around the shower, grouting, and laid the marble floor. Our aim was to get all the big ticket stuff done first so that we could putter away at the small stuff but have a usable bathroom (remember, we only have one!). So the last on our “major things” list was the vanity and sink. We actually started this project some time ago when we were still in the early planning stages. Why? Because we couldn’t find a pre-built vanity that would fit our very specific dimensions and so had to build one ourselves. But hang on, let’s rewind a sec.

To just refresh your memory, this is the iddy-biddy space we’re working with. See that heat vent on the floor? And how the wall has an indent where the sink is? Oh, and the door opens up just to the right of this picture. Yeah, it’s not much space and it’s pretty prescriptive. We needed something that was floating (so we wouldn’t cover the heat vent), something that was long to utilize the space, and something that was narrow so the door wouldn’t bang into it. 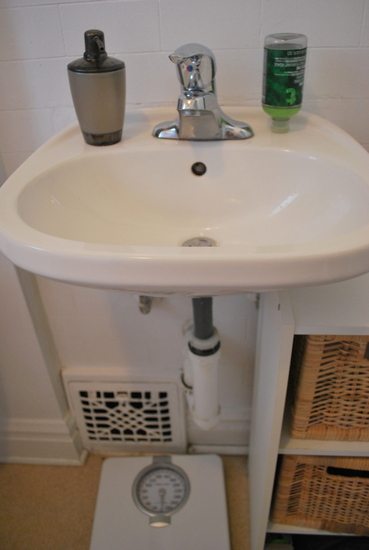 So we started our hunt. We looked at various hardware stores, kitchen & bath shops, and of course, IKEA. We found two options that were close. One from Multi Kitchen & Bath, and the other from IKEA called the Godmorgon. I had seen this slim IKEA guy lookin’ pretty fine in various bathrooms (both in person and on blogs) so was feeling like it might just be the one. Unfortunately though, neither piece had dimensions that were quite right. The longer versions were going to be too deep, and the smaller versions just wasn’t utilizing the space enough. Back to square one. 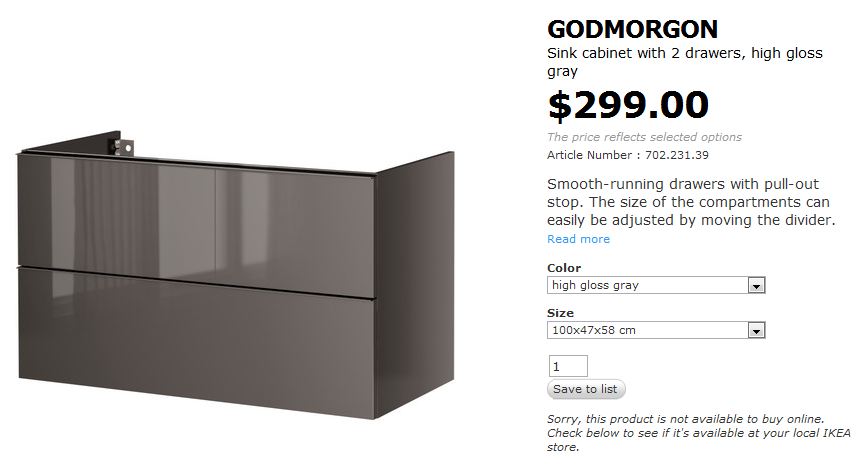 But then we came across this IKEA sink – the Lillangen. The dimensions were pretty much bang on. Like it was made for our little nook. So a seed was planted that maybe we should build our own vanity. It would be cost-effective and we could meet our exact specifications. Without much of a second thought, we went for it and brought this skinny guy home with us (without those wall brackets). 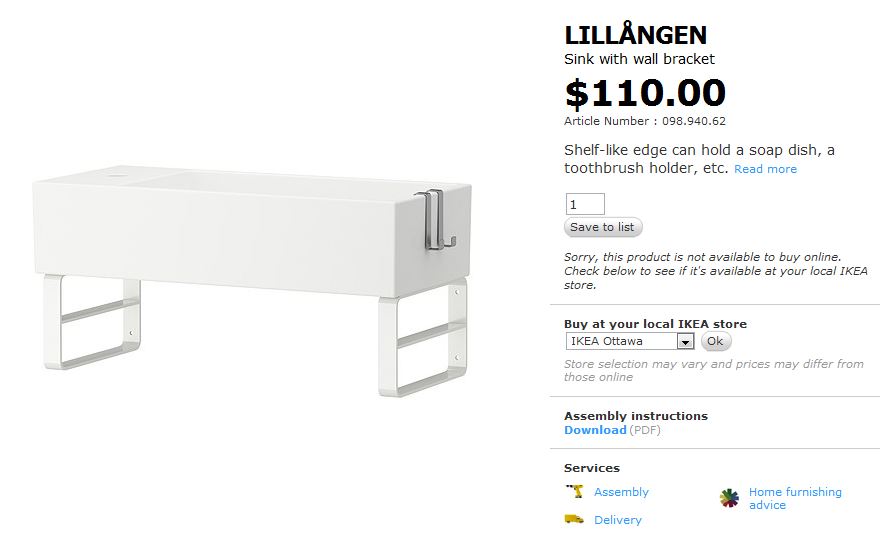 What followed? A trip to the hardware store to grab a bunch of inexpensive wood, brackets, and various other things. Then a trip out to my parents’ place where my Daddio has a pretty rockin’ workshop, and the boys got to work. 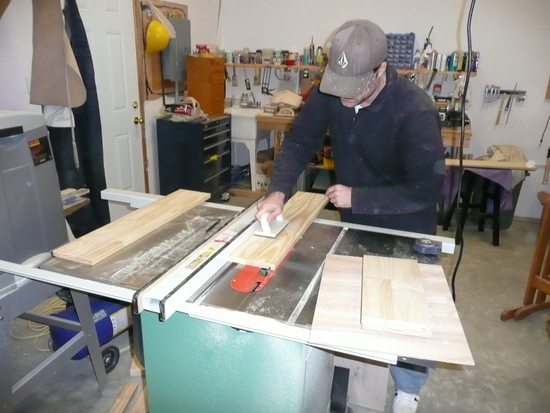 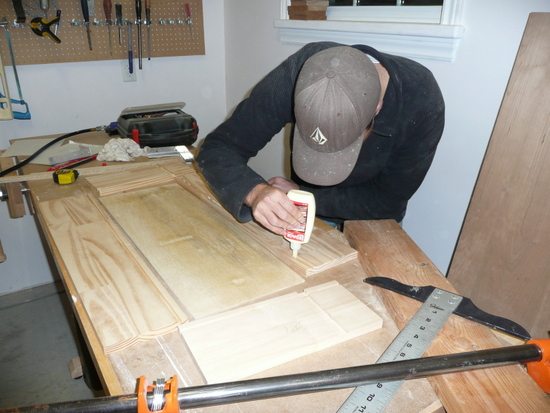 They cut, sanded, glued, and nailed.. 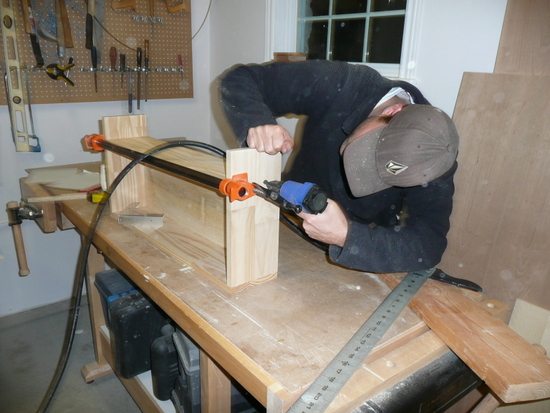 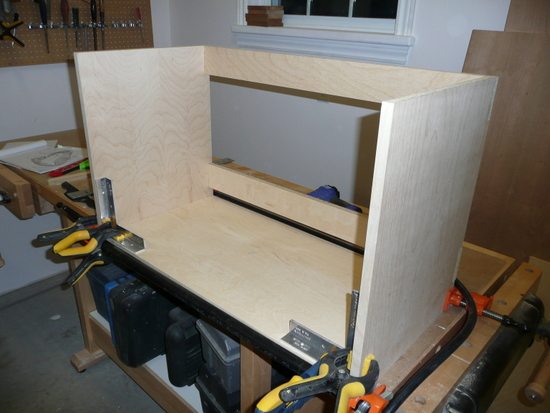 …and built something that was a pretty good replica of the IKEA unit. Two slim drawers in a floating piece that would fit our new sink perfectly (the drawers in the pic below weren’t installed into their tracking yet since we wanted to do that after painting). 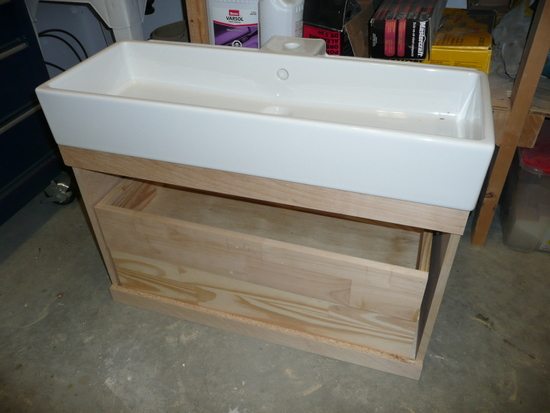 I don’t have a play-by-play or guidelines on how to build this unit since they just kind of winged it. If you have built things before though, you could probably draw something up and have a go yourself. There are also lots of books and websites out there that have building plans. Ana White‘s website for example has lots of DIY furniture plans.

I debated on staining versus painting, but pretty quickly decided to paint it. Lots of my inspiration photos for this project (which you can check out here) have pretty painted vanities, and since we had a lot of white tile going on I thought it would be a great place to bring in a bit of colour.

I started with a coat of primer (it took me two bottles of Krylon’s spray primer in white). 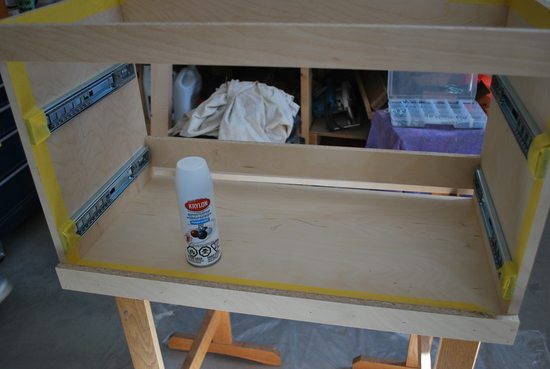 Oh and want to see how dorky I looked while doing it? Here I am, in my mother’s painting clothes. You’re lucky you can’t tell how high up my waist those pants go. Girl was lookin’ fiiiiine. 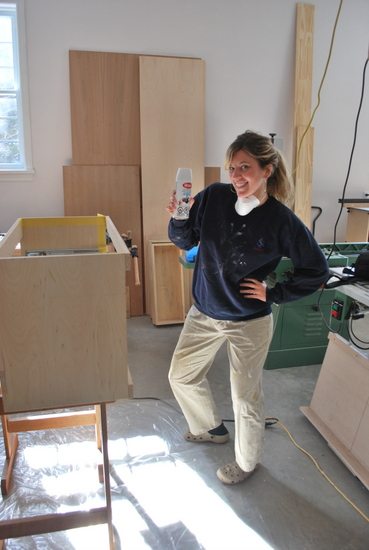 I decided on a sort of putty gray colour for the vanity – called sterling by Benjamin Moore. I figured it would bring out the gray in the marble floor and still be neutral (I want to be able to switch out the accent colour in this room with things like towels and accessories instead of committing to anything major now). So I had it colour-matched (only because my local Benajamin Moore store was closed at the time) in a bathroom-specific paint by CIL, which is higher gloss and will stand up to wear and tear. 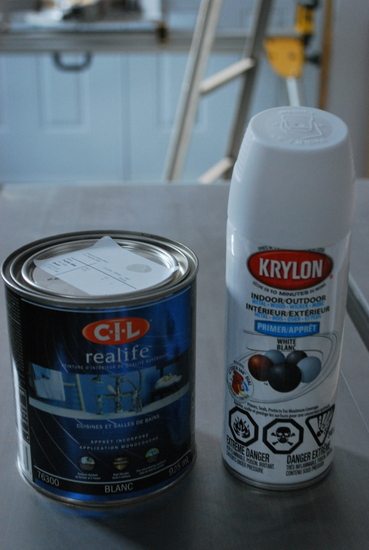 Here is how she was looking after two coats. The lighting in here wasn’t great, so it looks a little more blue/cool that it does in person, but you get the idea. 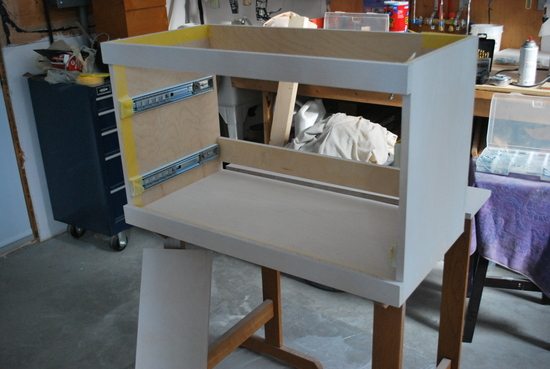 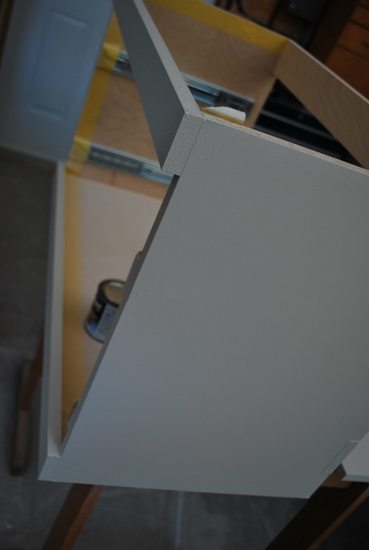 Two really light and even coats of this varathane finished it off. I have been using this brand for a few projects now and find that it covers really well and doesn’t yellow over time. The key is to apply it lightly though (just like you do with spraypaint). 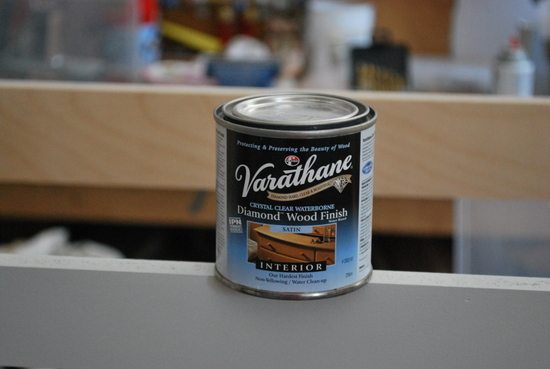 We have just started to actually install it in our bathroom, so stay tuned for the progress tomorrow! This isn’t an HGTV show with the half hour before-and-after miracles, this stuff takes time folks.

What about you guys? Build anything recently? Find a great new vanity for your own place? Have a painted versus stained wood vanity preference? Do tell.