Now that our wedding is over, I’m full on into home projects again, specifically a DIY faux capiz chandelier.

One of the first projects I tackled was one I had been itching to try for months. Have you seen those gorgeous capiz chandeliers, like this one at the home depot or this one from worldmarket?

Well, I’ve always loved them and when I saw a few DIY versions floating around in the blog world and knew how badly we needed a new light fixture for our office (and have a near-zero budget), I was sold.

How to make a Faux Capiz Chandelier:

I came across a hanging flower basket from the Home Depot for $2.50, so I snatched it up and gave it a quick spray with a glossy white spraypaint (Krylon brand). It took about three coats and was a bit tricky to spraypaint since I didn’t have a space to do it hanging up — this means you need to move it around between coats so you get all the nooks and crannies. 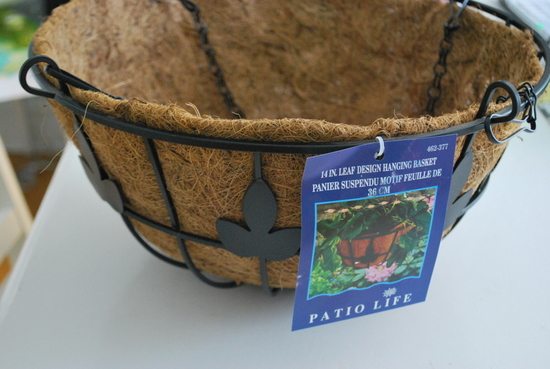 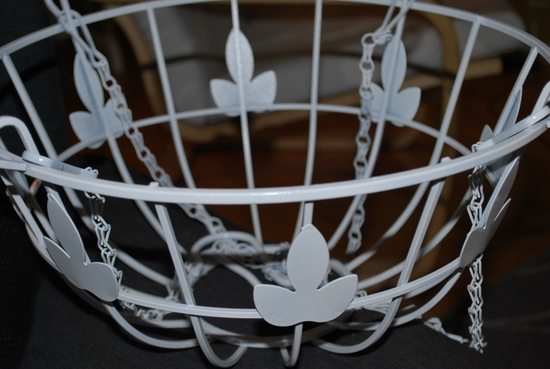 Then I pulled out the wax paper we had in our kitchen drawers. I cut out a bunch of sheets and then ironed them together, two by two. They stick together really quickly, so each set of sheets takes only about 30 seconds. I must’ve done about 25 or 30 sheets in the end — using up the rest of my roll. When you iron the two sheets together, they stick to one another and become a lot sturdier and have little flecks in them like real capiz shells do. 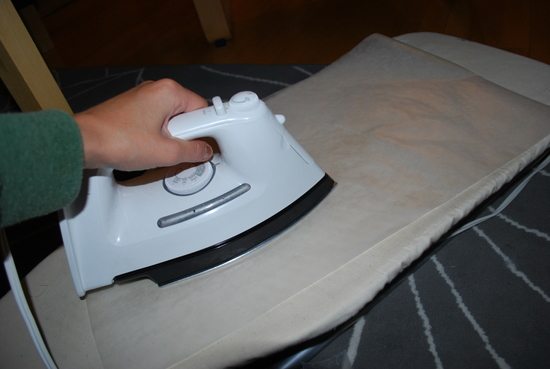 Once they have cooled, you need to cut out the circles. You could use a circle punch and it would definitely speed things up, but I didn’t have one and was happily sitting infront of the TV at the time, so I did it the old fashioned way. I used a circular object to trace out the shapes, then just cut the circles out. I saved some time by cutting the sheets into strips and then holding five or six strips together while I cut out the circles. This meant I could do multiple circles at a time. 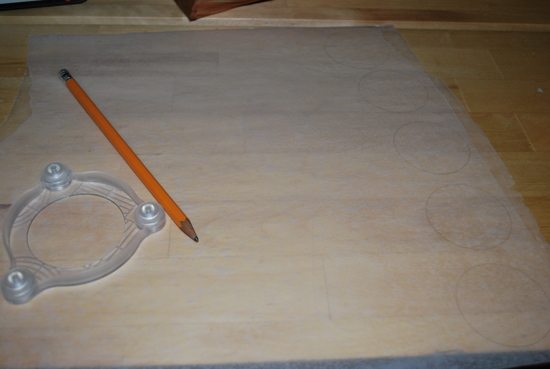 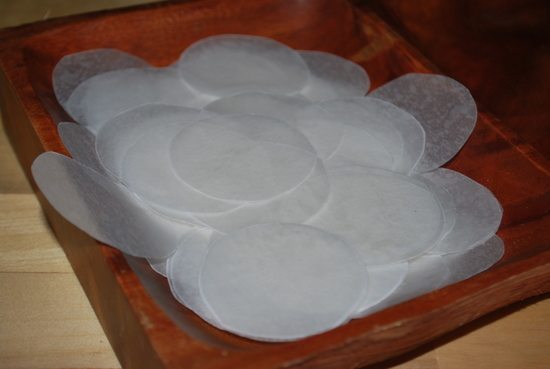 How to make a Faux Capiz Chandelier – Glue Gun & String

Once the circles were done, it was time to pull out the glue gun. I cut basic string into the lengths I needed and then simply put a dab of glue on each circle (usually towards the top) and held the string down into the glue. Then I just continued along the rest of the string (most were 6 circles per string). You’ll want to measure out how long the string should be — I did a few test sizes and then decided on what I liked best. 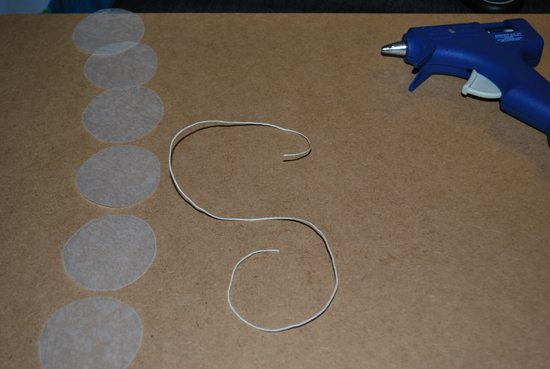 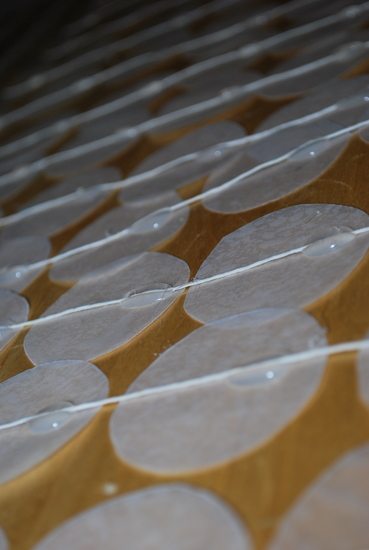 Warning: You need to do a lot of these strings. So make yourself comfortable, have a big space to lay out the strings as they dry, and have your fave TV show on in the background (my guilty pleasure? any of the ‘Real Housewives’ series… hellooo trashy TV). It took me three nights of ironing + cutting + glueing to finish ‘er off. 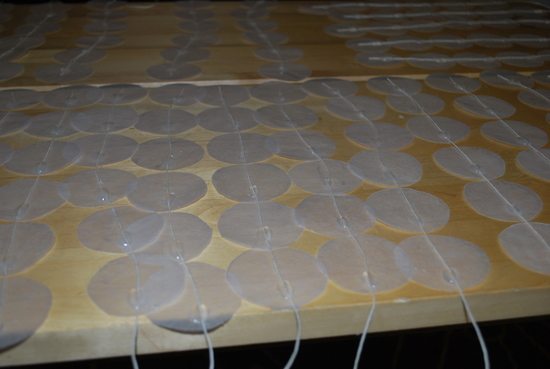 Then you just go ahead and tie the strings onto your basket. I made sure that they were put fairly close to each other so that there wouldn’t be big gaps and triple-knotted each string just to be on the safe side. My basket had three levels, so I tied strings around each one. Then just cut off the excess string once you’re finished. 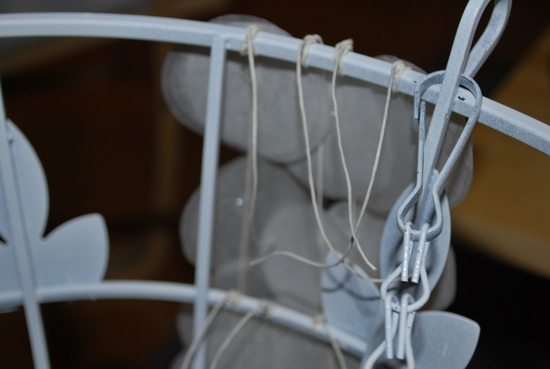 And here is the final product. Those three nights of crafting were totally worth it. I love how it looks! 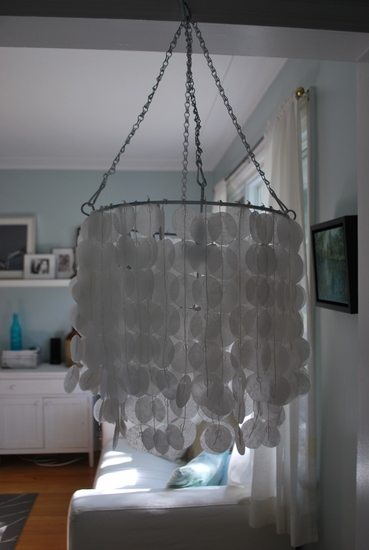 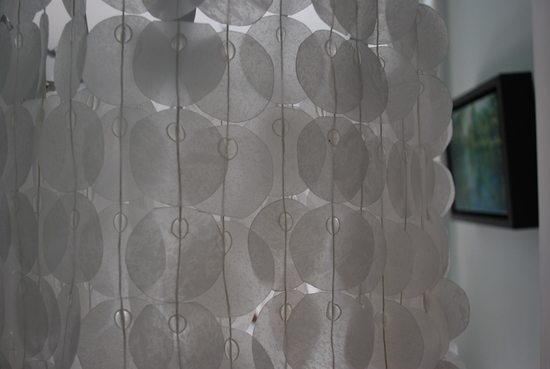 And it didn’t break the bank either. Other than the $2.50 for the basket itself, all other supplies were already owned (wax paper, string, glue gun sticks, and white spray paint).

We haven’t actually hung it up yet because we’re doing a bit of a makeover to the office, where it’s going to end up. Stay tuned for those details!